Kevin Trudeau is famous for his popular infomercials for his bestselling books, from The Weight Loss Cure to Natural Cures They Don’t Want You to Know to Debt Cures and more.

He’s committed to making a difference in the world. He wants to make a profit while doing so, but that’s the entrepreneurial mindset. His real love is informing people that there are natural remedies to most of the health issues of the day. He’s not going to let anyone stop him from spreading the word, either.

Over the last year I’ve gotten to know him. We’ve had several dinners, meetings, and email exchanges. I’ve been on his radio show, and I’ve interviewed him for my Hypnotic Gold members.

I’ve found him to be sincere and passionate.  Whenever I meet with him, I learn something new about health, healing and/or marketing, and even the Law of Attraction. Turns out Kevin is a big believer in LOA and uses it to be so successful. 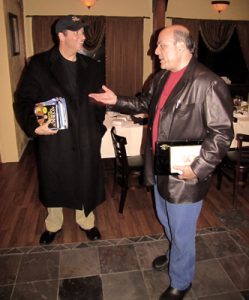 I have a terrific infomercial for my new book, Attract Money Now because of Kevin’s inspiration.

And when my back began to hurt due to the car accident in Russia a few months ago, it was Kevin who told me of a a cool new tool that has changed my life and sped up my healing.

Recently he gave me a copy of his new audio program, a fourteen CD set titled Your Wish Is Your Command. Since Kevin is a terrific story teller, a riveting speaker, and a walking library of information on attracting what you want in life (with a focus on attracting money), I couldn’t wait to listen to it.

I did and loved it.

I’m not an affiliate for the program, but I strongly encourage you to get the set and take the time to listen to it. You’ll learn a lot on many levels.

Just go to Your Wish Is Your Command.

PS — You can still read my latest book for free by clicking on this banner: