Homelaw of attraction loa Secret A Reason to Complain

A Reason to Complain

I have good reason to complain.

Last January I bought a brand new electric car, the Fisker Karma. Same one singer Neil Young and actor Leonardo Dicaprio have. Same one actor Ashton Kutcher drives on the TV series, Two and a Half Men.

I was excited to contribute to the environment in a positive way with a sports car that uses solar energy and electric power to get me around. I was one of the first in the country to own one. I was one of a handful in Texas alone. Plus the car looks stunning. People stop and stare. The car is just plain sexy.

But I had problems with it since day one.

Before I even received it, it was recalled. The battery had to have a different clamp to prevent possible fires. Once I did receive it, there were numerous little issues. In fact, I listed 17 of them to show the service department. 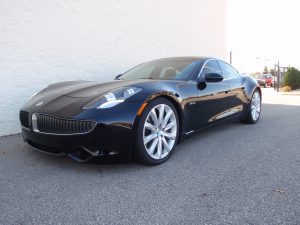 For example, sometimes when I was driving it, traveling at sixty miles an hour on a country road, the car would turn off. Off! It would reboot itself in the middle of the drive. The first time it happened was pretty scary, as I didn’t know if I would lose control of the car. I didn’t, but gee whiz, that wasn’t comfortable at all.

Other times the car would be playing some of my favorite music, when suddenly and for no apparent reason, it would switch to a Latino AM station. Go figure.

And then there were the times when the car ran out of stored electric energy and rolled over to the gas powered generator, which makes more electric juice. At those moments, at least for a few minutes, the climate control in the car malfunctioned and the inside cabin heated up. I live in Texas. You rarely want the car to heat up. And when you do, you want it to be your idea.

Then there were the fires.

The last Fisker fire triggered a recall of all the cars. Over 2,000 of them. Again, I took mine in, and was shocked to learn the company decided to not give loaner cars anymore. I paid $100,000 for the car, they are recalling it and inconveniencing me and everyone else, and they won’t give a rental car to ease my pain? It was appalling.

After the last trip to the San Antonio dealership, I called them and reported the car still had two issues. They took notes and said they’d call me back.

And the following day I received a snail mail letter saying that same dealership was surrendering their Fisker franchise. I’d have to go elsewhere for my repairs and service.

Then, at the end of last October, 16 Fisker Karmas caught fire and burned to the ground after being submerged in saltwater from Hurricane Sandy. They were all at dock in New Jersey, not delivered to any customers yet, but still.

And then the battery maker for the Fisker went bankrupt, forcing Fisker to stop making cars for a while.

Good lord! Will this ever stop?

All during this adventure, I complained.

I complained to Fisker.

I complained to the dealership.

I complained to the sales person.

I complained to the people who would marvel at seeing the car when I drove it and ask about it.

I complained to my friends, family, complete strangers, and myself.

I was so frustrated and discouraged that I started looking at other cars, wanting to trade in my Fisker Karma for a car — any car — I wouldn’t complain about.

Taking my own medicine, I finally stated a new intention, to have the Fisker fixed right once and for all, or to get into a new car that I would love and be issue free.

I was just tired of all the complaining.

When you add the fact that I am on the board of directors for A Complaint Free World, a movement to stop us all from complaining, I was more than embarrassed. 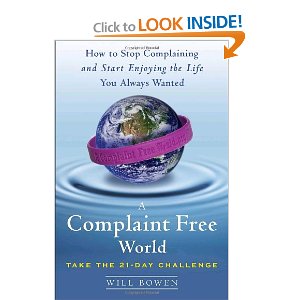 Manual on Not Complaining

I decided to start looking for the good in the car. The entire matter might not change, and the car might not become foolproof or fireproof, but I’d feel better.

After all, my complaining wasn’t changing anything and it was making me feel terrible.

It was time for a change.

I would never complain about the car again.

It was a simple but firm decision.

I had to run some errands right after that awakening. I charged up the car and took off. Everywhere I went, people asked me, “Gorgeous! What is it?”

I’d tell them. But I left off the complaints. I just focused on the 50 miles I can get on a charge, and the 250 more miles I can get with the gas generator making more electric energy. Plus the solar panels on the roof added a couple hundred miles a year. Sweet.

After running all my errands that day, I came home and noticed that I had one mile left on the stored charge. That meant my entire morning of running from place to place never used a drop of gas. I was suddenly proud of my car. I started to think it’s pretty cool after all.

“Any fool can criticize, condemn, and complain but it takes character and self control to be understanding and forgiving.” – Dale Carnegie

I contacted customer service at the Austin dealership to look at a couple final problems with the car. No one called me back for over a month.

What did that mean?

After all, I’m not going to complain!

A friend of mine likes to complain. He defends his choice by saying, “Complaining adds color to life! I like it!”

But I also notice he rarely gets what he wants. And that might be the big insight.

“The pessimist complains about the wind; the optimist expects it to change; the realist adjusts the sails.” – William Arthur Ward

When we complain, we stay focused on the negative. As the Law of Attraction teaches, you tend to get more of what you focus on. As long as I saw the faults in my car, I attracted more of them to see.

Time to break that pattern.

After all, it’s all in your perception.

When you stop and rephrase your complaint as a positive intention, you morph your energies into a beacon of light, seeking out the positive.

When I praise my car rather than condemn it, the car seems to work better. And even if that weren’t true in some measurable way, I felt better driving it.

The thing is, my feeling better about the car actually seemed to make the car better.

The Fisker dealership in Austin finally called me back, and I took the car in for a software upgrade and service. They kept my car for two weeks, having to order parts and such.

When I went to pick up the car, it looked brand new. They had detailed it and made it look showroom ready. That was incredibly wonderful to see.

They also said every issue I had was resolved. That was a huge relief to hear.

I got in the car, drove it home, and didn’t notice any issues.

I had nothing to complain about.

Weeks have passed now and my car is working flawlessly.

I love my Fisker Karma!

It’s the best car ever!

What was the change here?

Lesson: My not complaining led to a situation where I have no complaints.

Complaining wasn’t helping and made me feel lousy; Complimenting what worked in my car made me feel great and seemed to help the car with its repairs.

The opposite of complaining is complimenting.

I know it sounds impossible and at least unlikely, but the moment I switched from complaining to complimenting my car, always keeping in mind my intention to drive a car that I love, it began to get better. Or maybe I got better first, and that influenced my car. Either way, it’s a win.

Before you complain, think of what you really want instead. Then speak your intention rather than your complaint. That simple step will cause you to move in a new and more positive direction. Focusing on complaints keeps you stuck in that lower energy; focusing on your intentions moves you into a higher energy. No one is asking you to overlook poor service or to deny your disappointment, but to instead focus on the service and outcome you actually want. There’s a huge difference in how you feel and in the results you get.

Now don’t complain about it, either. 🙂

PS — Just this morning I got in my car and it wouldn’t start. I sat there wondering what to do. I didn’t complain. Instead, I stated that I prefer the car start and run. I called Fisker roadside assistance. A friendly woman said she’d be glad to call a tow truck for me, but suggested I try rebooting the car first. She said it’s a big computer. Sometimes you have to re-boot it. She told me how to do it. I did. The car then started right up. No problem. All is well. And I didn’t complain once. 🙂