Recently I got to spend an hour and half talking to actor Lou Ferrigno, best known for his bodybuilding career and playing the comic book hero in the classic TV show, The Incredible Hulk.

Lou is 60 years old and looking as fit as ever, if not better than ever. He’s focused, hard working, intense, smart, driven, and dedicated.

We met because of our mutual admiration for actor/body builder Steve Reeves. I have a large collection of Reeves items, from his car to his gym to his trophies to his clothes. I also coauthored The Steve Reeves Cookbook.

Lou idolized Reeves, met him twice, and modeled the famous Reeves classic physique to sculpt his own impressive body. 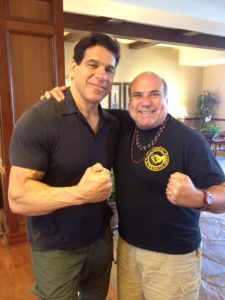 Lou Ferrigno and Yours Truly

I wish I could share all of the 90 minutes we spent together. He was very open with me, and I want to honor his sharing. We talked about everything from mindset to motivation, from fitness to aging, from our fathers to our careers. Lou was just as interested in me as I was in him. Lou’s life has not been a piece of cake. He’s had many challenges, and he has triumphed over all of them.

“If I hadn’t lost my hearing, I wouldn’t be where I am now. It forced me to maximize my potential. I had to be better than the average person to succeed. That`s why I chose bodybuilding. If I became a world champion, if I could win admiration from my peers, I could do anything.” – Lou Ferrigno


Lou works out five times a week, even while traveling, for an hour. He does twenty minutes of cardio and the rest of the time is spent lifting iron. He eats the same thing every day, which is egg whites for breakfast and salads at night. He tops off his carb intake at 150 grams a day and none after 7 pm. He has a glass of red wine at night. He doesn’t smoke cigars. He’s a family man with a big career. Despite all his successes, he has big dreams and is driven for more.

I gave him my audio set, The Secret to Attracting Money. He pointed at the word “attracting” in the title, smiled, and said, “I’m very interested in this.”

We were talking about thinking positive when Lou stopped me and said, “I’ve never heard it put that way before.”

I was so caught up in the exciting moment of hanging out with a legendary action figure and super star that I had to ask him to clarify.

Lou answered, “You said when people start thinking negative, they lose all their power.”

Turns out power is a core theme with Lou. He admitted he was the most competitive person on the planet. He also said he went into bodybuilding as a form of self-protection. He built a physical wall, literally, to protect himself. 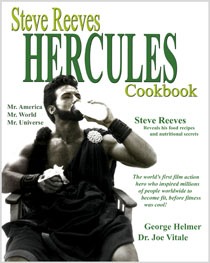 Cookbook by George Helmer and me

Lou surprised me by asking what books influenced me the most. I didn’t realize just how much he still wanted to learn and grow and expand his success.

I told him about The Book of est and The Magic of Believing. He didn’t know of either but seemed fascinated.

Again, our ninety minutes together covered a lot of ground. I encouraged him to host his own event, turn his books into e-books, record audio versions of his books, and more. He was very open to my ideas, and answered all of my questions as well.

If I had to give you one take away point from Lou, it’d be this: Do something.

He is a massive take-action guy. We agreed that ideas are a dime a dozen and talk is cheap. It’s action that separates the men from the boys, and women from the girls, the wannabees from the successes.

I’m impressed and inspired by Lou.

When we were to part, he hugged me. I was surprised, as I didn’t read him as a hugger, but I sure welcomed the embrace by the incredible Lou Ferrigno.

His site is at www.louferrigno.com

PS – I’ll be in LA appearing on CBS television news this Saturday morning, talking about my book, Attract Money Now. Tune in if you’re in the LA area.