Recently I caught the classic 1956 movie, Moby Dick, based on the famous book by Herman Melville, starring Gregory Peck, directed by John Huston, screenplay by Ray Bradbury. I was reminded of how hypnotic and meaningful the movie is, with symbols about Divinity and messages about the Law of Attraction, and more. I loved it. Always have.

You probably know the Melville book is an American classic first published in 1851. You probably also never read it. At least not all of it. Even Ray Bradbury admitted he could never get through the thing.

I have read it. I’m a fan of the book. I read everything by Melville when I was in college in the 1970s, including Billy Budd, Typee, and The Confidence Man, and even his overlooked poetry, such as Clarel.

Moby Dick is actually a story about the war between ego and, well, let’s say it: God. Captain Ahab is out to kill God. Yes, the great white whale is a symbol. But everything in life is. In this case, the whale represents the Divine. And Ahab wants it on a stick. Or at least a harpoon.

As Pip says in the movie, “That ain’t no whale; that a great white god.” 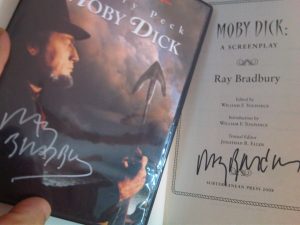 But why does Ahab hate God/Whale?

The movie cuts to the chase and tells the story best. Ahab went fishing one day, ran into God in the appearance of a huge white whale, and God/whale challenged him. Ahab lost a leg. Got a facial scar. And was royally upset. He devoted the rest of his life to revenge. Of course, trying to blame God for your life is a losing battle. After all, God’s in control, not you.

And this is Ahab’s problem.

Ahab thinks he can find and destroy God/whale. He bribes his crew with a Spanish gold coin to find the whale. He uses maps and math to help pinpoint the next appearance of the great white.

Along the way Ahab ignores another ship in need of help. Ignores his crew who needs to work. Ignores Starbuck, his first in command, trying to warn him of his choices. And ignores his own mission: to hunt for whales so the world has light from burning their fat.

Listen as Ahab declares how he would “strike out the sun” if it insulted him:

“Speak not to me of blasphemy, man; I’d strike the sun if it insulted me. Look ye, Starbuck, all visible objects are but as pasteboard masks. Some inscrutable yet reasoning thing puts forth the molding of their features. The white whale tasks me; he heaps me. Yet he is but a mask. ‘Tis the thing behind the mask I chiefly hate; the malignant thing that has plagued mankind since time began; the thing that maws and mutilates our race, not killing us outright but letting us live on, with half a heart and half a lung.”

He’s hypnotic, as most madmen are.

He’s obsessed, as most madmen are.

And he’s going to fail, as most hypnotic, obsessed, madmen do.

He’s not going to be able to kill “the thing behind the mask” because that thing is God/Divine/Life.

How do we know Ahab failed?

The only reason we know of the story at all is that there was a lone survivor. Ishmael, played by actor Richard Basehart in the movie, is a detached observer. He’s a witness. He’s a reporter of the event. He lives to report the lesson back to us.

Because you and I need reminded that there is God and there is our ego. When you battle God/Divine/Life/Whale, you lose.

Here’s the lesson as I see it (with apologies to Melville, Bradbury, et al): Accept what happens to you in life as a gift, learn from it, turn it around if need be, and then get on with your life mission.

Feeling resentful, angry, unforgiving and driven by revenge is only going to do one thing: sink your ship.

The secret to living a happy life is to go with the flow. That doesn’t mean roll over and play dead. Put up your sails to use the God-given winds to get you where you want to go, but don’t blame God/Divine/Whale when you hit any bumps in the road. You attracted them as an unconscious dance of energies with life. Just adjust your sails and get back on track. Life goes on.

It’s self-sabotage at the extreme.

What whale have you been fighting, anyway?

PS — Here’s sci-fi legend Ray Bradbury giving a misleading (it wasn’t as easy as he claims in this clip) but fun account of how he wrote the screenplay to Moby Dick for egocentric director John Huston by becoming author Herman Melville: