I read Michael Singer’s bestselling book, The Surrender Experiment, in one day.

His true story of simply meditating every day and doing whatever was in front of him to do led to everything from him being a land owner, leader of a spiritual community, author of a bestselling book, a multimillionaire with hundreds of employees, and more.

Read it in one day

All he says he did each day was “surrender” to the “flow” of life.

While I loved the book, it raised a lot of questions.

For example, Singer seems oblivious to his own belief system.

Early in the book, when he is offered money to teach, he resists and refuses.

It sounds more like he had beliefs about money.

Otherwise, why wouldn’t he surrender to the offering?

Later, when his software service becomes so marketable that it brings millions of dollars in his direction, he redirects it away from himself, buying more and more land and donating it to his growing spiritual community, which is where he happens to live.

There is nothing wrong with any of this, of course.

But being aware of this behavior is crucial to spiritual awakening.

Too many people still think “money bad” when in fact money is neutral.

It’s your beliefs about it that make it good, bad, or indifferent.

Also, Singer says he has “no intentions” and no “personal preferences” – yet he intends to meditate every day and intends to surrender to the flow, and prefers to meditate in the morning and at night.

And when he can’t decide something, the most powerful personality in the room gets him to “surrender” to his desire, such as take a job, or take pay.

Clearly, the author is intending and preferring.

But let’s go even deeper.

Singer’s surrender to the flow of life lands him with an FBI raid, a lawsuit of the magnitude more attorneys then you have ever thought possible are brought in to handle the case, and the journey through the courts lasts years.

While it all worked out in the end – which is part of Singer’s point – why did it happen in the first place?

Throughout his book he suggests that the “the flow” of life is an underlying spiritual force that has intelligence and that is taking care of us, leading us to the experiences we need for our next growth spurt and consciousness expansion.

While I don’t argue with the flow – I do my best to honor it each day myself – you have to stop and reflect on what is the flow – your unconscious mind or the sum total of all life’s previous decisions or some wise Divinity?

Carl Jung said it best with the quote I used in my book, The Attractor Factor —

“Until you make the unconscious conscious, it will direct your life and you will call it fate.”

Millions of people, including Singer, swear by meditation as the way to see beyond the chatter of the mind and find the flow.

But many new books, such as The Buddha Pill, offer compelling evidence that meditation can actually be dark.

Personally I feel it depends on the user.

If you are already of sound mind and body, meditation may help you relax even more and give you the ability to see behind the curtain, to the “whiteboard” or Witness of life.

But if you are new to meditation and personal development, and have any emotional issues or past traumas, meditation may mask your wounds, hide your emotions, and allow your unconscious to trick you.

For example, we saw the movie Love Sick the other night.

It was about a man who falls in love and then sabotages his love.

To everyone else, he is insane.

Why would he sabotage his own love life?

To himself, he is sane.

His behavior and what he sees is all very real, and very accurate, to him.

It isn’t until someone shows him an MRI scan of his own brain in love, and explains his self destructive behavior, that he wakes up and begins to reshape his brain to create new behavior.

But his “flow” led him to paranoia.

His “natural” tendency was to fall in love and then find a reason to break off the relationship.

That was his flow.

And it wasn’t healthy, or getting him what he really wanted.

Again, I firmly believe that the unconscious/subconscious is running the ship of our lives, and often into rocks. 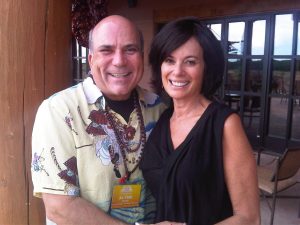 The late Debbie Ford, who I studied and loved, also taught that our "shadow" side can deceive us

We have to awaken to our own programming to get a handle on just what is urging us to act.

After all, I’ve spent decades teaching about “counter-intentions” — those unconscious beliefs that cause you not to attract your conscious intentions.

Books such as The Key and audios such as The Missing Secret are designed to help you awaken to what is and is not the flow in your life.

Here’s another example that you’ll probably relate to:

When you go on a diet, your natural “flow” is to keep eating, not stop.

The current of your life is already moving in the direction of over eating.

That is your present “flow.”

It will feel like you are battling the flow in order to hold your hands down when facing yummy foods.

So, do you really want to follow the flow when you are dieting?

When I was drafting the post about my new Gullwing Mastermind, I accidentally hit a key that deleted the entire post.

In my panic, I closed all my open windows and rebooted my computer.

When I opened the post, the file had returned.

But then things got even stranger.

When I reached to hit the button to save my post, I accidentally published it.

I couldn’t believe it.

I wasn’t ready to publish the article yet.

But I took a deep breath, decided “something” wanted me to go ahead and post that article, and I accepted it.

But was it my unconscious or the flow that made me do it?

To paraphrase Jung, until you awaken, you will say Fate (or The Flow) is creating your life, when in reality it’s your own unconscious mind.

And let’s not forget that you can re-direct the flow with a decision.

If you haven’t been working out, your flow is to stay on the couch.

But after you set an intention and make a decision to exercise, your new flow will have you moving again.

At first it may feel unnatural, because you are going against the “flow” of a habit you had, but as you persist, your new flow will become natural.

Said another way, the neuro-pathways in your brain were already paved and running to keep you on the sofa; when you decided to exercise, you began to build new neuro-pathways, thereby creating a new behavior, a new habit, and a new flow.

So yes, there is a flow in your life already moving, but you can redirect it with a decision.

You just have to be awake enough to do it.

And now, before you go, let’s look at this whole issue even closer...

There is a deeper level of flow, the “witness” behind it all, and identifying more with It than the thoughts and feelings overlaying it, may be a wiser approach to surrender.

Our job is to discern the difference.

For example, what drove me to write this commentary?

On one level it could be my unconscious beliefs about being “right” and how I feel it is necessary to prove how smart I am by pointing out what Singer missed.

On another level, it could be due to the deeper flow nudging me to write this because it needs written, no matter what explanation or rationale, in order to contribute to the awakening of the planet.

Or maybe I jut decided it was a great opportunity to speak my mind.

The Witness non-judgmentally observes all.

But I, like Singer, am simply doing what I sense is the next appropriate thing for me to do in this moment.

Again, I loved Singer’s book and urge you to read it. It is a hypnotic read, fast moving, and entertaining. He is on to something with surrender, but just be alert to what you are surrendering to.

After all, the Witness just witnesses; it doesn’t tell you what to do.

It will witness you cry or laugh or do or not do.

You, as a thinking, feeling being, still get to decide.

Bottom line: surrender to the flow that is the most loving and empowering, while paying attention to how you created/attracted the flow in the first place through your own previous decisions, and know that any decision you make now contributes to or even redirects the flow.

Just something to think about.

PS – I am currently reading Singer’s earlier book, titled The Untethered Soul. It is also excellent.