In 1931 Vash Young inherited a fortune. This was during the Great Depression in the USA when much of the country lost jobs, savings, hopes, dreams, and more. Young was so grateful for his inherited fortune that he spent his entire life sharing it.

Last week I inherited his fortune.

It was strange, unexpected, and yet incredible.

I didn’t know Young before last week, though I had heard of his fortune.

I never imagined he would pass it on to me.

I’m grateful for it, of course.

And I’m now going to share that fortune with you.

A friend of mine in the Miracles Coaching program told me about an old book he found that he thought I might like. But he couldn’t recall the title or author. He was obviously moved by the book. I’m a bookaholic, so I was interested, even without all the details. I asked him to send me the book’s info when he came across it. I didn’t think any more about it.

But last week my friend sent me a package. Inside was the mysterious book. The title is A Fortune to Share. The author was Vash Young. I had never heard of the book or the author. Since I was busy with projects, such as scheduling the launch of my new audio program (The Abundance Paradigm), and already had fifteen books to read either on my ipad or my desk, I just put the book aside. It would have to wait.

But the book wouldn’t wait.

Something about it called me to it. Maybe because the book was from 1931 and looked like a lost gem in self-help and self-improvement; maybe because I love success literature and this title seemed like it was from that category; maybe because I hoped the author had been a friend of a man I wrote about from that era, Bruce Barton, in my book The Seven Lost Secrets of Success; maybe because the author put a spell on the book. I don’t know. But before I knew it, everything else got pushed aside and I started reading A Fortune to Share.

Within minutes, I was captivated.

The book is written in the first person, with the author talking to me about his fortune and how it changed his life. The old Young of poverty and reckless living was gone; the new Young was now so rich that even the Great Depression couldn’t touch him. 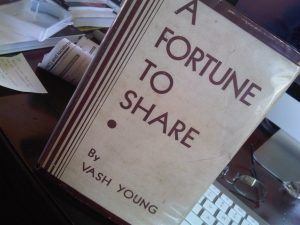 His mission became the life-long quest to share his fortune with others.

Young explained that you own a factory. Most of the time you make junk in that factory. As a result, no one buys from you. No wonder you were broke and struggling. No wonder life looked bleak. Your factory wasn’t producing what anyone wanted.

He went on to explain that the same factory could make gold.

He inherited a mental fortune.

As long as Young (pictured below) accepted his fortune and shared it, everything he wanted would come his way, and without trying to make it happen.

Young literally did attract a financial fortune (he sold over $80,000,000 in life insurance) due to his discovery and his sharing. He went from a life of go-getting to a life of go-giving. (He later wrote a book titled The Go-Giver.) The more he gave, the more he attracted. His mission truly became one of sharing the mental fortune inside himself to awaken your own understanding that you have a mental fortune inside you, too.

While it’s easy to wish that Young’s fortune was all cash and he shared it by writing checks (which he often did, just not to you or me), what he actually gave us is something far more valuable: he pointed out you have a cash-making machine in your head.

A Fortune to Share contains much more information, and many wonderful stories. It’s a hypnotic read. Breezy. Easy. Fast. It also delivers some unforgettable wisdom, such as:

“Any experience can be transformed into something of value.”

“Prosperity can not be built on fear!”

For a long time, Young would hold “Trouble Day” every Saturday. He would let anyone walk into his office, dump their troubles on him, and then Young would do his best to help the troubled soul with his philosophy, and often with money.

In talking to an unemployed man one day, Young tells him, “You haven’t been unemployed all these months, you have been working for the wrong boss. You have been working for failure, discouragement, fear and worry and the sad part of it is that there has been no salary for your labors. You seem to be destitute, but I am going to tell you how to become rich overnight. I want you to deposit the following thoughts in your mental bank tonight: ‘I am not afraid – I am a success, not a failure – I have an inexhaustible supply of courage, energy, confidence and perseverance.'”

Young helps the man out with a suit of clothes and a little money, and reminds him to draw on his new mental bank account when he needs it.

Within a week, the man has a job he loves.

Young’s first book was so sincere, helpful and timely that it became a national bestseller. He followed it with several others (which I have yet to read but eagerly await), including The Go-Giver, Be Kind to Yourself, and Let’s Start Over Again. All were bestsellers. All were booster rockets for a weary country suffering during the Great Depression of the 1930s. When Young was in his seventies in 1959, he wrote a final book summing up his philosophy of life, called Fortunes For All.

I found Fortunes For All and read it. Loved it, too. On the cover the publisher says, “Let Vash Young show you that your mind is worth $175,000 or more!”

He then invites you to try an experiment:

“Go off by yourself with a pad and pencil and write out your own ticket for a happy and successful life. By that I mean put down all of the things you would like to have or be.”

He adds, “After imagining every wish has been granted, then go one step further. Start in being the ideal person you think you would be if you had everything your way.”

Young’s philosophy of fortune basically said that once you began to be that happy, successful person now, then you would naturally attract all you wanted from the being.

Sounds a whole lot like step four in my book, The Attractor Factor, and step five in my book Attract Money Now, where I suggest you “Nevillize” a goal to help bring it into reality. 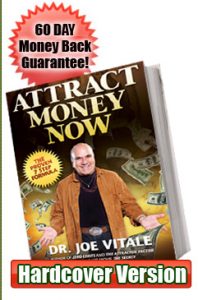 In other words, feel what it would be like to already have the thing you want or be the person you long to be. Feel it now.

But Young is also wanting you to be something greater than a satisfied person. He wants you to embody the traits of — dare I say it — God.

Decades ago in Houston I gave a talk where I encouraged people to think like God. I said God wouldn’t think in terms of lack and limitation. Why should you?

But Young wants you to act like God, meaning live love, compassion, forgiveness and all the other positive, enlightened states that a God would have.

Young was a great believer in taking action, too.

A chapter on selling in Fortunes For All proves that he sold such a staggering amount of life insurance by focusing on giving, thinking of others over himself, and following his being principle. But he also took non-stop action. Even when Young was on jury duty for three weeks, he still held the sales record for the month. How? He kept taking action.

All of this is so inspiring and powerful that I wish Vash Young was still alive so I could thank him in person. But I’ve inherited his fortune. And I’m sharing it with you. I’m hoping you will now share it with others, too.

Take control of your mind and you can live a life of magic and miracles — a life of good fortune.

And now it’s yours.

What do you think, anyway?

What is your factory producing?

Who’s the boss of your own mind?

Who are you being?

PS – Be sure to pass your fortune along to others by telling them about Vash Young, his books, and this blog post’s message. Together we can share the wealth, and make a difference in the world. Thank you.

Note: My new audio program, The Abundance Paradigm: Moving from the Law of Attraction to the Law of Creation, comes out on November 9th.