I love asking people in the countries I visit about their customs. One of my favorite questions is, “What secrets do you have for attracting money or anything else?”

In Russia I learned about Hochun, the Siberian “wish maker.” I love him as a tool for focusing on intentions. Pat O’Bryan and I released our own version of him at The Secret Russian Wish Maker.

In Poland I learned that you can attract money if you hang a painting of a Jewish man counting gold coins in your home or office.

My friend Andrzej Batko said he bought such a painting, placed it in his office, and it worked. I of course wanted one, too. 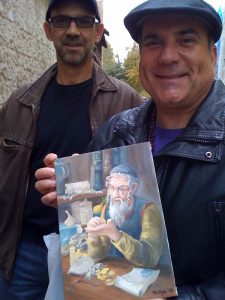 We found one in Krackow. I loved it, bought it, and am having it framed right now. When my new office is completed, I’ll hang it where I can see it. 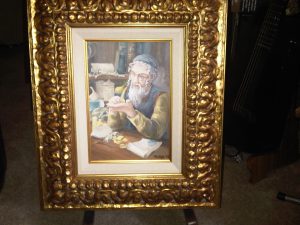 This raises the question: Do these items actually work?

I don’t know. But my theory is this: if it doesn’t hurt you to hang a painting or look at an image, then why not do it? When something is fun, adds to the positive energy for your desire, it has to be good.

Here’s something even more fascinating:

I met famed Polish photographer Grzegorz Syllain in Warsaw. He followed me around one day and took pictures of me shopping for cigars and clothes. His teenage daughter followed and helped.

When we stopped to have coffee, I asked his daughter what she enjoyed doing. She said painting. I then told them what I leaned about the Polish custom of having the money attractor painting. They both knew the power of the painting.

But they didn’t see what was coming next.

“When I go back to Texas and write about my painting, people will want one for their home or office, too. The thing is, I won’t have anywhere to send them to buy a painting. If you would set up a website, and your daughter would paint the art, I could direct them to you.”

His daughter loved the idea.

He loved the idea.

“If you do this, you could attract enough money for school or anything else you want.”

They nodded with excitement.

I then challenged them.

“I want you to start painting and to get the site up by the time I return to the States in three days. If you do, I’ll tell my readers about it.”

So did his daughter.

“I don’t want a penny for this,” I explained. “I want to see you act on this idea. This is the secret to attracting success in life; when the idea is there, honor it and act on it.”

Sure enough, they honored their word.

Their site is now up at Polish Money Attractor Painting. 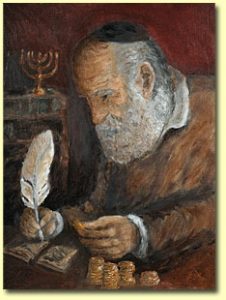 If I were you, I’d do two things right now:

1. Write down an idea you’ve had and haven’t acted on yet.

And go get your own original Polish Money Attractor Painting.

What if it works?

PS -The above photo of Nerissa and I was taken by Grzegorz in Warsaw, Poland. His site is at www.fotani.com The painting is by Grzegorz’s wife and daughter. Order it at http://www.gobeliny.com