Back in 2006 I held the world’s first Canine Concert.

It was a publicity event to promote my 1998 book on P.T. Barnum, There’s A Customer Born Every Minute, which was revised, expanded, and reissued in 2006.

Many people donated their time and talents on a mind melting hot and humid Texas day to help me.

Little did any of them know — including me — the karma we triggered.

The Canine Concert was a playful hoax, a publicity stunt, an idea given to me by the legendary prankster Alan Abel.

Alan is a genius.

He is a “professional media prankster.”

Before and beyond Stephen Colbert and Jon Stewart, Alan, as one newspaper called him, was “The Rembrandt of the ridiculous.”

Alan started his career in the 1950s with a fake organization called S.I.N.A.: the Society for Indecency to Naked Animals.

The crusade wanted to clothe critters.

Alan made national news, ignited a craze, and became infamous. 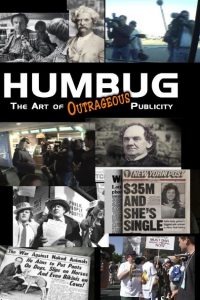 Alan helped me get media attention for my book The Attractor Factor with a fake lotto win in 2006, which was turned into the short documentary Humbug!

He also wanted me to run for U.S. President later, on the “Common Sense” platform.

But I went to Alan for ideas on promoting my Barnum book.

He offered the Canine Concert.

The idea behind it was to put on a show “for dogs only.”

I thought it was wild, didn’t know if it would work, but was willing to try it.

I sent out a survey to my list to find out what kind of music their dogs liked. The majority vote was for rock and roll.

So I went looking for a local rock and roll band that would be willing to play at a sound level only dogs could hear (like using a dog whistle), and who would play for the fun of it. 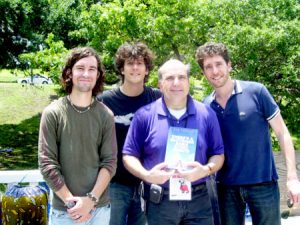 The band Porterdavis and me in 2006

I’m a lifetime member of the Society of American Magicians, and knew many entertainers through the local magic club. Many of them donated their time to help me. And one (hypnotist C.J. Johnson) introduced me to the band, Porterdavis. The group agreed to play at my wild stunt.

There were more volunteers, of course.

I had a beautiful live mermaid (Lisa Nicks), a performing magician (John Maverick), an MC (Kent Cummins), P.T. Barnum (played by Kevin Coyne) and even a protesting cat. 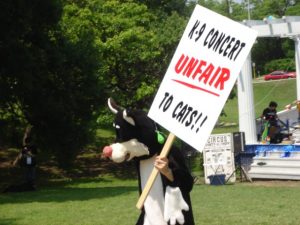 Protesting cat made the news too

Three news crews came to film the people, the dogs, and me.

We all had a good time and we parted after the event.

And here’s where the story gets juicy…

Years went by and one day I received an email from Daniel Barrett, the lead singer for Porterdavis.

He wanted to have lunch and ask for some advice about a career change.

I remembered him, of course, and agreed.

Over lunch, Daniel told me he was planning to start a program to help first time musicians write, perform and record their own music.

What Daniel didn’t know is that my secret dream was to write, record and perform my own music.

Daniel had no idea I wanted to become a musician.

I had no idea he wanted to help people become musicians.

Yet we met — years after he did the good deed of helping me at the event — and our karma balanced out.

Daniel has so far produced five of my 15 albums, including an album with me, Daniel, and Grammy nominated singer Ruthie Foster.

Is this all amazing or what? 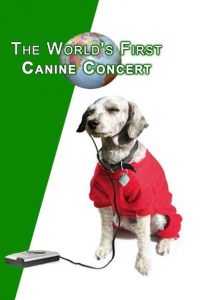 DVD of the famous event on Amazon

But the story doesn’t stop there…

We’ve been having problems with our wireless Internet for a long time.

I finally jumped online and searched for someone nearby to come to the rescue.

I called a listing and left a message.

I didn’t think much more about it.

Later the same day, a fellow named Randy called me back.

“Are you the Joe Vitale that’s the self-help guy?” he asked.

“Then we met years ago,” he explained.

“Yes. You gave me my first job when I moved to Texas.”

“Yes. I was the protesting cat at your canine concert.” 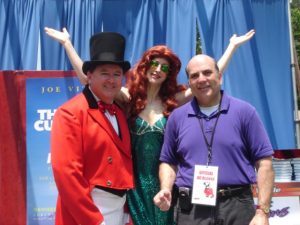 P.T.Barnum and a mermaid, too!

I was surprised, delighted, and impressed.

Again, a good deed from years ago returned.

Karma had balanced the tables again.

Neither Randy or Daniel (or me) had any idea that their giving in 2006 would lead to new business and new friendships almost a decade later.

And Alan Abel, the man who offered the Canine Concert idea to me, is still (at age 90) writing and hoaxing. I’ll be publishing his autobiography soon, so he won out in this karmic play, too.

There are probably lots of lessons in this story, but here’s a big one:

Give joyfully and without concern for return and the good karma you trigger will come back to you multiplied and spilling over.

You don’t need to do everything with money in mind.

Sometimes helping a good cause, or helping a friend, without concern for pay or pay back, can lead to spectacular unexpected miracles later.

Do it and Expect Miracles.