“Joe, did you make a deal with the devil?”

“I heard you just recorded a track of saxophone music with Mathew Dixon and then you went and played sax on an album with Ruthie Foster and Daniel Barrett but you’ve only been playing the sax a few months.”

“And that means I made a deal with the devil?”

“You also came out with nine albums in just over three years. How else can you explain such rapid accomplishment?”

“Well, you could credit it to hard work.”

“Come on, what’s your real secret?” 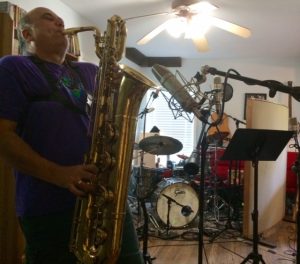 “Truth is, I make deals with angels.”

“Yes, angels. Most angels are unemployed, you know. Most people don’t ask them to do anything.”

“How does that work?”

“Why would I want to make a deal with the devil when my angels are floating around waiting for me to make a few requests? I keep them busy. I ask for help and guidance for whatever I am doing, like learning how to play the sax.”

“And they help you?”

“You tell me. I just recorded a saxophone track and I’m beginning an entire album of sax music.” 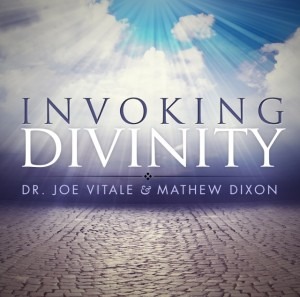 “Not really. I just enlist support from the angels and they come and help.”

“I’m sure it could be harder if I requested it.”

“Come on, there must be more to your method!”

“It’s only work if you don’t really want to do it.”

“But you really believe in angels?”

“Do you really believe in a devil?”

PS — Angels come in all forms. Look for them in my Miracles Coaching program, too.

I’ve written about signs before.

I’ve explained that there are “flags” in life that give you clues to move forward, pause, or stop.

I look for signs all the time, to confirm my direction, or to warn me to reconsider, or to come to a complete halt.

These signs can be anything, from a line in a book to a street sign with a double meaning to a dream to a statement by a friend or from a movie character, or anything else.

Let me explain with a story… 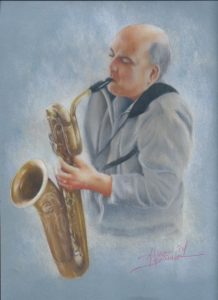 I’ve been practicing the saxophone this year and loving it.

So far I have three vintage saxes: an alto, tenor, and baritone.

I know that Selmer made some highly collectible horns for around twenty years. They are called Mark VI and the prized ones have serial numbers from 53201 to 236000. They are considered the Holy Grail of saxes.

While I have two Selmer vintage saxes, I don’t have a baritone sax (which is what I play) from that specific golden era.

But one showed up on eBay.

I stared at it, researched it, considered it, wrote the owner a few questions about it, and more.

I also double checked the serial number on the sax to be sure it was from that magical Selmer period.

But I couldn’t bring myself to buy it.

I kept meditating on the purchase, cleaning internally on any doubts or concerns or uncertainties, but I couldn’t get a resounding yes to actually buy it.

I constantly looked for signs to buy it.

And – believe it or not – I even tried to force a sign from the Universe by consulting an I Ching app, an angel app, and a Magic 8 Ball app.

Those were silly apps, I thought, so I was willing to dismiss them.

But the biggest and strongest sign I was getting was from me.

I kept feeling — for some unexplained reason — that I shouldn’t get this saxophone.

But I wanted the sax.

I could afford the sax.

I knew the sax was pristine and collectible. Even at the seller’s opening asking price of $10,000 (and his appraised price of $15,000), I could rationalize investing in it. The horn would only go up in value.

But my whole body wouldn’t let me go there, to actually buying it.

I even got to the point where I typed in my bid on eBay, trying to override all the signs, but as my finger hovered over the key to make the $10,000 bid a permanent contract to buy the sax, my body said “No.”

My mind said yes – at least part of my mind – but the rest of me said no.

But I knew to trust the signs.

When you don’t trust the early warning signs, you can end up regretting something.

Since the sign was me, and it/I was saying “red flag,” I passed on the sax.

I trusted that it wasn’t for me, for reasons I may never know.

I had attracted the sax into my life for a reason, but apparently the reason wasn’t to own it.

So what was the reason?

Over the next day, I reflected on why I wanted that sax. 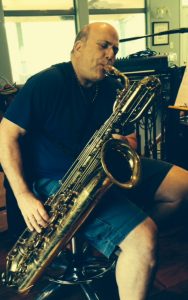 As I meditated on it, I knew that the case the sax came in was original and complete.

The case I have, for my vintage 1952 Super Balanced Action Selmer baritone, is missing the handle.

I want a handle.

So I wrote to Chadd Berry at Worldwide Sax and asked if he could get me one.

He said yes, and did.

I also realized that the sax for sale came with a metal mouthpiece.

I’ve learned enough about the sax to know the sweet sound comes from the mouthpiece, the reed, and the player. The sax itself just amplifies the sound, which you manipulate mostly with the keys. Some sax players spend a fortune on collecting boxes of mouthpieces, desperately looking for the right one for them.

I wanted a metal mouthpiece.

I did some research, determined one that could work for me, and ordered a gold one.

That felt great, too.

Getting the gold mouthpiece (as well as the case handle) was easy, effortless, and almost instantaneous.

That’s how this process is supposed to work when all the flags are green.

It’s almost as though I were drawn to the sax on eBay to more deeply connect to my inner compass, and to further my sax playing by getting a metal mouthpiece, not an entire sax, to improve my playing.

For the record, both pieces arrived and work perfectly.

The vintage case is easier to look at and carry with a new handle, and my sax playing is smoother and easier with the gold metal mouthpiece.

The lesson here, as I see it, is that you have to pay attention to your entire energy system.

If your mind says yes but most of the rest of you says no, that’s a sign.

What is it here for?

What could it mean?

PS — A great way to fine tune your inner compass is with a trained objective person. Maybe see Miracles Coaching.

PPS — My favorite modern sax player is Mindi Abair. I’m going to have a private sax lesson with her tomorrow, which I am very excited about. She plays the alto sax rather than the baritone, but boy can she play! Her new album, Wild Heart, is a jazz-rock-sax masterpiece. Here’s a taste of her sound from a live performance a while back: