Jaime Vendera is a famous vocal coach who challenged me to write a book on using Law of Attraction and mind power etc for musicians. I threw the challenge back at him. The result is our new book, already a bestseller, titled Mind Over Music. Here’s my introduction, which explains the back story: 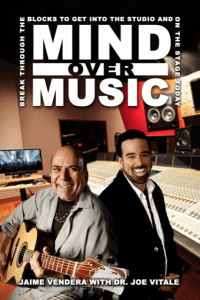 Why Anything Is Possible

An Introduction by Dr. Joe Vitale

One day I checked Facebook and there was a curious message from Jaime Vendera. I knew Jaime from his books on singing, which helped me with my own vocal technique. I had gone from zero to musician in the span of a few years, and Jaime was one of my never-met coaches along the way. I had bought and read his books. I knew he was a badass vocal coach. His ideas had helped me, and still do.

So I looked at his message. He wrote:

“Listen up, Vitale, the Universe smacked me again to put this in your brain…and I am pretty sure I told you this a few years back:) You REALLY need to write an “LOA/Ramp up your music making mojo” type book. It’s not a book about the art songwriting, but more a book lining out the steps to get a musician off their butt and finishing their songs and recording/releasing them… You are THE perfect person to write this considering what you’ve accomplished!!! If you don’t write this, that voice in my head will never leave me alone. It will pester me to pester you until you hear it too;) There, I told you, just as I was instructed to do. So now please write the book so it will make the voices stop, hahahaha;)”

I admired his playful audacity. I’ve written over 70 books and Jaime knew it. He also knew my expertise in self-help methods, as well as the Law of Attraction, applied to would-be musicians, would be a hit.

He also knew that my appearance in the hit movie The Secret, and my books on the Law of Attraction (LOA), made me qualified to teach musicians.

But I also felt that this idea was his, not mine. I suspected he was just tossing a monkey at me and hoping I’d adopt it. I already had enough monkeys. 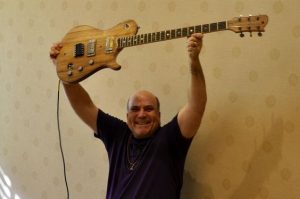 So I wrote back to him saying:

Seemed like a fair counter offer to me. Jaime could blow me off but at least I didn’t dismiss him. I was acknowledging his idea but turning it back in his direction. I was sending the monkey home. To my surprise, he accepted my challenge.

He wrote back saying:

“Hahaha well that will work then. I just had this image of you explaining how you knocked out so many songs so quick. I’m knocking out 4 new products right now but I’ll start writing soon.”

He did, too. Not only did he start writing, but he caught on fire and wrote the entire book by himself – in only four days.(!)

A week later he wrote to me saying:

“Just letting you know I never back down from a challenge;) I am writing three new books, filming two new videos, two new audio programs, and writing/recording as we speak, and it is all part of the focus of this book. feel it should be called MIND OVER MUSIC and show the musician that Writer’s block is only a state of mind, as well as teach them how to get it out of their heads and recorded in record time. So, I had a quick question for you. Do you have a musical bio I can copy/paste. i want to mention the day you decided to become a musician and record and ALL the albums you have released since then. I am blown away by your energy and what you’ve done. It is soooo refreshing.”

He was referring to my becoming a musician with 15 albums recorded in about 5 years. That seemed impossible to most people. But I teach “Anything Is Possible” (and wrote a book titled that very statement.) I sent him the material he wanted and he inserted it into his book. Then I read the book.

Now it was my turn to be blown away.

He wrote the book with a passion I rarely see in other authors. And he gave steps and secrets and insights along the way. He included me and my story of becoming a musician, beginning with zero experience, and going on to record numerous albums, study with rock icon Melissa Etheridge, and even overcome terror to sing on stage with my Band of Legends. 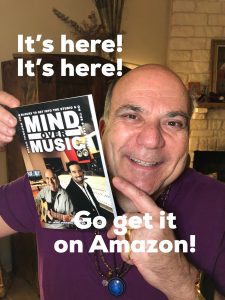 In short, he had created the very book he wanted me to write. And he did it without me.

But being the kind and generous soul that he is, he wanted my name as coauthor because he said I inspired the entire project. He wanted me to have credit. That’s the kind of loving person he is. So I accepted.

The good news for you, the reader, is you get to benefit from the combined experience of two authors, teachers, coaches, and musicians: us. 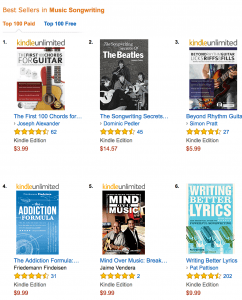 I’m living proof that you can dissolve blocks and get in the studio and on stage, no matter who you are, where you are, what your level of experience, your age, or much else.

And Jaime is living proof that when you adopt his methods, you will shine in the studio and on stage, too.

All in all, you are about to read an illuminating guide to getting past the excuses and blocks and into the studio and onto the stage. Bright lights and applause await, as well as the deep satisfaction of sharing your music with the world.

And now, curtain up…

PS – Our bestselling book, Mind Over Music, is more than Law of Attraction and self help principles; it is about facing fears and overcoming doubts so you can get in the studio or onto the stage. It is on Amazon for Kindle and in print at https://smile.amazon.com/Mind-Over-Music-Through-Blocks/dp/1936307456/ 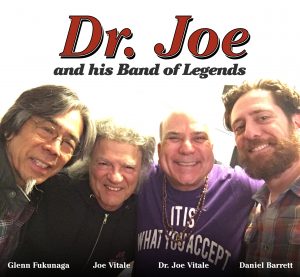