Moonshine is a barn owl.

But he doesn’t know it. 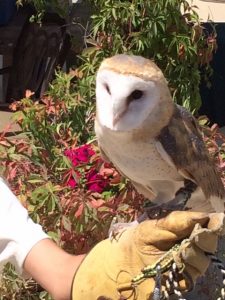 He was stolen from his nest when he was still in an egg. When he hatched, opened his eyes, and looked around, he saw a human. He was supposed to see his mother owl.

Owls “imprint” the first thing they see at birth. Because Moonshine saw a human upon birth, he thinks he is human. He can even parrot human language.

But he can never be released into the wild, because he doesn’t know he is really an owl. He has no survival skills.

When we were born, we started to “imprint” the behavior we saw around us.

No doubt your parents weren’t enlightened. They had issues with money, relationships, and more.

You unconsciously “imprinted” their beliefs. 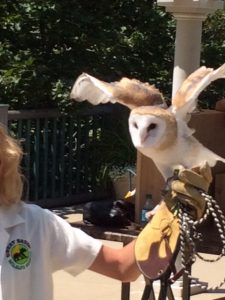 Moonshine the barn owl weighs about one pound, is mostly fluffy fur, and will live about two years

Today, as an adult, you wonder why you have issues with money or health or relationships.

You wonder where your programming came from.

The answer is in Moonshine the barn owl.

It’s not your fault, any more than it’s Moonshine’s fault.

You simply “imprinted” what you saw after birth.

But you have an advantage over Moonshine.

He can’t change his imprint.

Because you have self awareness, and you have the ability to actually reprogram your mind, you can erase your imprint and break free.

I met Moonshine last year and saw him again this year, both times at the Miracles Coaching retreat at Robert Redford’s Sundance mountain resort in Utah, when Patti Richards of Great Basin Wildlife Rescue came to educate us about birds of prey.

This time she also brought an Eagle Owl, the largest owl in the world.

The largest owl in the world

This Eagle Owl is gigantic.

It’s hard to comprehend his size without seeing him in person, especially sitting with a barn owl beside him.

He has no known predators, can lift about fifty pounds (!), and is essentially fearless.

Good thing he doesn’t live in Northern America, as he’d be flying off with our dogs, cats, and children.

Where Moonshine thinks he is human and can’t survive in the wild, this Eagle Owl imprinted fearlessness from his Eagle Owl parents, and can essentially fly, hunt, thrive and survive – up to fifty years.

You may have been imprinted with limiting beliefs, but you can change them.

Or choose to read self help books, listen to positive messages, or recreate himself.

PS – Patti Richards of Great Basin Wildlife Rescue in Utah is doing great work. Last year I released an owl I named Mango. This year we released two hawks. Seeing the second, young adult hawk soar higher and higher into the Utah sky, high above the mountains, demonstrating what freedom is all about, brought tears to my eyes. I want you to have that kind of freedom, too.