I saw Barbara Ehrenreich, author of the book Bright-Sided, on The Daily Show with Jon Stewart last week. Her book reveals  “How the Relentless Promotion of Positive Thinking Has Undermined America.” I love Jon Stewart’s interviews and was keenly curious about this author and her book.

As I watched Ehrenreich on television, I got the feeling she’s a wounded soul. She talked about being diagnosed with cancer and how people around her told her to just think positive. I know from having my own cancer scare a few years ago that her feelings were justified. When you’ve been diagnosed with the C word, you’ve been kicked in the gut. Smiling people don’t help.  I felt for her and agreed with her. Positive thinking in that dire situation isn’t welcome, at least not at first.

As I often do after seeing a Jon Stewart interview, I jumped on Amazon and ordered her book. I was so curious that I paid extra for next day delivery. 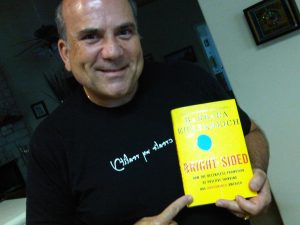 It’s a well written historical overview of positive thinking. It mentions all the positive thinkers you might guess, from Napoleon Hill to Joel Olsteen , Jack Canfield, Will Bowen, Bob Doyle, Rhonda Byrne; to the teachers in the movie The Secret, including me.

Turns out Ehrenreich heard me speak a few years ago at the National Speakers Association annual convention. There were more than 6,000 people there, so I never met her. But I apparently left an impression. She says in her book –

“Vitale, who looks like a slightly elongated version of Danny DeVito, offers the theme of ‘inspired marketing,’ and also love. “

Inspired Marketing is the title of a book I wrote with Craig Perrine, and love is the core  of everything I do.

But Ehrenreich didn’t say either fact.

She mentions I’m a disciple of P.T. Barnum in her book, too, but doesn’t explain that’s because I wrote a popular business book on him, titled There’s A Customer Born Every Minute.

For a journalist, she cleverly left off statements that would justify what I, and others she mentions in her book, stand for and teach.

I agree with her.

The thing is, most people who say they are critical thinkers are actually skeptical thinkers.  They quickly dismiss concepts without trying them, or demand scientific proof for concepts that are still being researched. That, to me, is delusional.

The most powerful books I’ve read on the subject of critical thinking are by Steve Siebold. His books are wake-up calls to your brain. Read his book 177 Mental Toughness Secrets of the World Class, or Die Fat or Get Tough, or read his forthcoming book on mental toughness secrets of the rich.

While I prefer positive thinking over negative thinking, I have to admit that positive thinkers can sometimes be blind to reality. When I had my cancer scare, I didn’t just think positive. I also took massive action. I searched for cures, I contacted all the healers and medical doctors I know, I tried every method offered to me, and I stayed persistent. The end result is a clean bill of health. But I didn’t get there by putting on a happy face and sitting in a corner.

Bright-Sided is a bestselling book and Ehrenreich is getting lots of publicity for it.  While she ends the book with a call to be more critical in our thinking, and to take action to get results, I suspect it will mislead many readers. Too many will jump to the conclusion that positive thinking doesn’t work at all. They’ll use the book to justify not being optimistic, or not choosing to feel good. They’ll just keep on complaining.

My reminder to you is that you always have a choice: When confronted with any moment, you can look at it cheerfully, unhappily, or objectively. I prefer the latter but with a positive expectancy.

When I got the heath scare, I at first was walloped with the news. But then I set an intention to find a cure. I expected one because, as I say in my book The Attractor Factor,  there’s always a way to handle any problem. My critical thinking — or maybe it’s better called objective thinking — included the possibility that positive action and positive expectation would be better than just unhappiness, happiness, or no action.

I appreciate critical thinking, but it’s subject to delusion, too. Most of the people I know who claim to be critical thinkers still have limiting beliefs and negative attitudes they aren’t even aware are in their own head. They are actually skeptical thinkers as a form of self-protection.

So how do you get out of this maze so you can have a clear-headed, productive life?

If having a coach is part of what Ehrenreich condemns as something that has “undermined America”, then I have to disagree with her. In fact, I’d go so far as to suggest she get a coach to help her unravel her own thinking about “Bright-Sided” being  negative. It could also help her heal her psychic wounds.

But as she openly says, it’s “reckless optimism” that bothers her the most. With that in mind, I suggest she’s correct. You don’t want to be recklessly optimistic, but practically optimistic.

In other words, choose what you want, have an optimistic expectancy about the results, take action to attract it, and monitor your progress for feedback and course changes. That’s how you make practical use of the Law of Attraction.

That’s not being “Bright-Sided”, that’s being smart.

Finally, decades ago I had a landlord who made fun of me for reading success literature, such as positive thinking books.

I was struggling, broke and unknown at the time. I was paying him two hundred dollars a month to live in a dumpy little room in his house. I didn’t look like I was going anywhere in life.

He caught me reading a Norman Vincent Peale book (probably Enthusiasm Makes the Difference) and said, “You believe that shit?”

While at the time he questioned me I had no evidence for any future success, and any critical thinking person could have dismissed me as a dreamer, today I’m wealthy and well known.

Was it because I read positive thinking books?

Was it because I chose to be “bright-sided” about life?

Was it because I took massive action and kept a positive expectancy about my future?

What do you think?

Note: The T-shirt I’m wearing in the photo of me and the book says “I Create My Reality.” It’s backward writing. When I look at my shirt in the mirror, I see it clearly. It’s a direct message to my unconscious, and a real conversation starter for others who see it. Call it “Bright-Sided” clothing.