Recently I spent the weekend listening to The Zero Point, my newest audio program from Nightingale-Conant.

It might seem odd to hear that I listened to my own program, but you have to remember that I more or less “channel” my new programs.

I don’t use a script or read from a book.

Inspiration directs me and I just follow the lead.

The result amazes me, and makes me want to listen to my own audios to hear what I said. 🙂

For example, The Zero Point reveals — for the first time anywhere –The Law of Zero.

It also explains how to send requests to the Divine but also, more importantly, how to receive inspiration.

And there are great processes, like meeting Morrnah — the founder of modern ho’oponopono (as described in my books Zero Limits and At Zero: The Final Secret to Zero Limits) — and having her speak to you directly.

I also reveal the three levels of mind.

The guidebook that comes with this new program contains new clearing tools, images to use, and more. 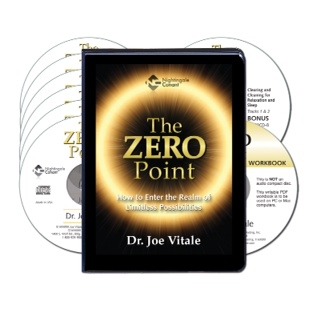 Plus there are relaxation exercises, original healing music by Guitar Monk Mathew Dixon and myself, even two songs written and performed by me (off my Strut! album).

The Zero Point represents my latest, most advanced, most current, and most profound spiritual work ever.

It’s designed to lead you to an awakening.

I loved hearing the program, and think you will, too.

Please check it out right here.

PS — Here’s a brief overview of The Zero Point:

“Anytime you see a turtle on top of a fence post, you know he had some help.”

This is relevant because I just finished the long awaited sequel to the bestselling book Zero Limits and was reminded of something along the lines of the turtle observation. It’s about how to motivate yourself and those around you.

My new book is titled At Zero: The Quest for Miracles through Ho’oponopono. It picks up where the first book stops, and is pretty gripping in what it reveals.

The long awaited sequel to the bestseller "Zero Limits"

In it I tell the story of how ho’oponopono began (it wasn’t all love and light), and I share personal stories of my own dark nights (it’s not all bunny rabbits bringing me coffee every morning).

I also share a deeper understanding of what Dr. Hew Len taught, I give a great deal of fascinating information about Morrnah Simeona (the actual creator of authentic ho’oponopono), and I share some deeper secrets behind this mystical Hawaiian healing method – many revealed for the first time anywhere.

You’ll find the book hypnotic, deep, and unforgettable. The book, and its cover, are designed to be “cleaning” tools that work on you as you hold it and read it. And you can have a copy of it before anyone else by attending this event —

The book will be published in January 2014. Audio versions will come out next year. But anyone who attends my Attract Money Now LIVE event in November will be the first in the world to receive a copy. (See PS below)

Meanwhile, I wanted to share an insight about that turtle mentioned above.

A decade or more ago, I was in the home of Jerry and Esther Hicks, of Abraham fame. I helped them with their promotion in the early days, wrote the foreword to one of their books, created a full page national ad for them, reviewed their first books, and more. I love them both (and miss Jerry).

At their home I noticed a framed quote on a table. It was, as I recall, from the TV show, The Virginian.  In essence, it said that a man was able to accomplish more by having someone who believed in him more than he believed in himself.

It struck me as odd at the time. I was reading and teaching about “do it yourself” concepts. I was yet to learn about the power of having someone believe in you as a way to generate more results.

Of course, this is a key secret of coaching.

Besides accountability and instruction, with a coach you have someone who believes in you.

That is powerful beyond measure.

I have done my best to encourage and believe in every single person I’ve ever met who shared a goal with me, even if only for a few minutes over coffee.

At this point in my sixty years, it’s hard to count how many people have gone on to create results where none existed before. I’m not taking credit for their results. They had to do the work.

I’m pleased that I could add a little fire of encouragement to them, so they could pursue their dream.

It wasn’t hard, and it didn’t take long.

But this isn’t about me.

I’m urging you to encourage others.

You have no idea what potential is in the people around you.

For example, I worked for a giant oil company back in the early 1980s in Houston. I was writing and teaching and pursuing my career as a writer, but my “day job” was as a geological technician. I was there until about 1984. I then left (read laid off), and struggled my way into success.

When the movie The Secret came out in 2006, many long lost friends saw me in the film, Googled my name, and reconnected with me.

One man who had been a supervisor at the oil company wrote to me and said, “I wish I knew then what a gem I had around me in the office.”

That was flattering, but it made me realize that everyone around you is a gem. You may not know their skill set, but if you encourage them, it could come to light.

One of my favorite childhood actors was Clint Walker, who played Cheyenne in the hit TV show of the same name. 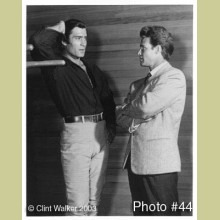 Clint is alive and well at 86 years old.  A few years ago, he gave a presentation. At the end of it, after he received his standing ovation, he thanked everyone in the room for being an inspiration in their lives to others.

You didn’t have to have a hit TV show to be an inspiration, Clint explained. You could encourage others right where you lived, by what you said, and what you did.

I was reminded of all this while writing the sequel to Zero Limits, because along the way, a relative criticized my music. It gave me an opportunity to do some extra cleaning, ho’oponopono style, and it led to an important insight.

I was told by my peers early on to “gird your loins” when I started recording my own songs, as everyone has an opinion about singer-songwriters. Some people don’t like the Beatles. (Gasp). Some people won’t like me. (Faint.)

When my relative criticized me, I realized that what I — and everyone – want, is encouragement.

The world is full of negativity, bitterness, and ego.

What we long for is sunshine, in word and deed.

Triggered by my experience, I started a new song that basically says, “You can achieve any dream, all you really need, is someone who believes, in you.”

I was just in New York City, for a private master mind with a small group of powerhouse Internet marketers. The photographer there, Donato DiCamillo,  had a rough childhood growing up on the streets of Brooklyn. But he said something unusual happened that helped him make better choices as he grew up.

In NYC with photographer Donato DiCamillo

As Donato hung out on street corners, consorting with the wrong crowd, a local business man would drive by, honk his horn, roll down his window and tell him, “You’re better than that, kid!”

Donato told me that this happened repeatedly for years.

He kept hearing, “You’re better than that, kid!”

He didn’t know the man in the car.

He didn’t know why the man focused on him.

He found out later that the man was a local businessman, fairly successful, and a little eccentric.

Donato went on to tell me that because he heard “You’re better than that, kid!” over and over again, the statement lodged itself in his brain. Today, of course, he’s not on the streets, and was hired to be the official photographer for our private mastermind.

All because someone believed in him.

When I attended my first Bill Phillips Fitness Transformation Camp last February, I saw Bill do something unforgettable.

He walked around the room, looked each person in the eye, and said, “I believe in you. You can do this.”

It was very powerful. 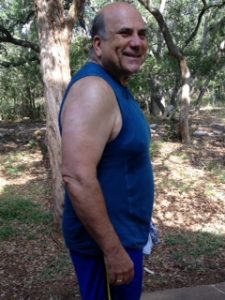 Bill’s belief in me caused me to stay focused, work his 12-week program, and get terrific results.

At the end, I received a medal from him, saying I am a winner.

You can imagine how good that felt.

My reminder to you is to encourage others.

Be a good friend.

“All you need, is someone to believe, and I believe in you.”

If a turtle can be picked up, and elevated to higher ground, so can you.

You can be The Turtle Whisperer. 🙂

You can look for inspiration, and encouragement.

But meanwhile, be an inspiration to others.

By the way, I believe in you.

Go for your dreams.

PS – At the Attract Money Now LIVE event in Austin, Texas in November, I will deliver a brand new presentation on Authentic Ho’oponopono, based on the upcoming sequel to Zero Limits, that will no doubt stimulate you and maybe even “burn some hair” with the truth and new techniques it reveals. Every attendee will get a copy of the new book, and will have the chance to have their photo with me with it (if they want).

There will also be a surprise comedy show on Saturday night, a special “install the concepts” session on Sunday morning, a live experience of Miracles Coaching, a demo of The Secret Mirror technique, and so much more.

Bill Phillips, Dee Wallace, Mindy Audlin, and others, will be presenting, too.

You can also meet me and other attendees at a private social function on Friday evening.

AND you can have $12,000 in online videos to help you awaken your millionaire mind the very moment you register for this once-in-a-lifetime event. (!)

Go get the details at – http://www.attractmoneynowlive.com/