When my drummer was here recently for the recording of my sixth self-help singer-songwriter album, titled The Great Something, he talked about how much he loved the old 1960’s hit television show, The Twilight Zone.

It’s Twilight Zone-ish enough that my drummer has the same name as me, grew up in the same area of Ohio as me, and went to the same college as me – but we never met until five years ago, for the making of my first singer-songwriter album. 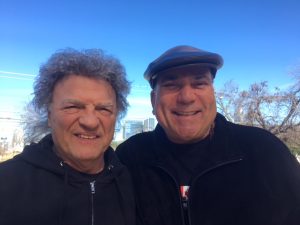 But it gets even stranger when one night an episode of The Twilight Zone aired on television – one I don’t recall ever seeing before.

As I watched, an idea for an “instant change” self-help technique came to me with a jolt.

Oh, this is good, I thought to myself, laughing.

Wait till I tell everyone about this!

And this is where the story gets really interesting.

But let’s start at the beginning. 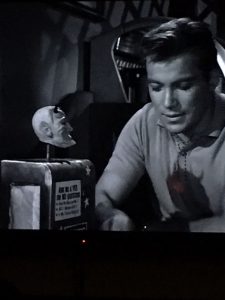 William Shatner in The Twilight Zone

I’m a huge fan of The Twilight Zone TV show.

I was five years old when it first aired in 1959, but I saw virtually every episode after that, and still watch them today. Each show was genius. Great acting, great stories, great lessons.

Over half of the 150 episodes were written by the man who created the show: Rod Serling.

Serling deeply influenced me when I was a teenager.

I studied his scripts, short stories, and movies to unlock his mastery at writing.

I loved his screenplays for Seven Days in May and Requiem for a Heavyweight.

OVERALL THEME LEADS TO CHARACTERS THEN ON TO PLOT

RESEARCH BACKGROUND FOR ANY STORY

CONTINUITY… TIE SCENES OR PARAGRAPHS TOGETHER

I almost signed up for the Famous Writers School, as Serling was on their board (as was John Caples, another writer who would influence me decades later).

It didn’t happen. I was still in high school, and my parents couldn’t or wouldn’t swing the tuition for the correspondence course.

But something even better happened.

He was giving a presentation in Youngstown, Ohio, not far from my home. Two friends and myself went to hear the great one speak. It was around 1970.

I was too excited to sit still.

I was star-struck and eager to meet the icon.

He walked out on stage, cigarette in hand, tanned, tiny, unshaven, tight lipped, and uncomfortable. 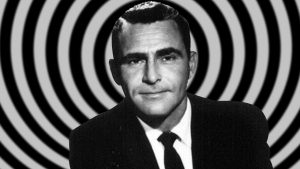 I was instantly disappointed.

Serling was a chain-smoking little man with darkness and insecurity in him.

He said if there was a thump at night, he’d be the first one outside in his shorts.

He said he was the only boxer who had to be carried into as well as out of the ring.

He was articulate, self effacing, and entertaining.

But I wanted to see a super human, not a mortal.

Though I was shy and nervous, I managed to ask him a question.

I raised my hand.

He nodded at me.

“Do you plan to write your autobiography?” I asked.

“No,” Serling replied. “Nothing much has happened in my life. It’d be boring.”

Here was one of early television’s most influential writers.

A creative mind on the level of genius.

He wrote screenplays for some of the most haunting TV shows and movies ever.

He won several Emmy Awards for his work.

He served in the war and received the Purple Heart and Bronze Star, as well as trauma and wounds that would give him nightmares his entire life.

He was known as “the angry young man” of Hollywood, fighting with TV executives over censorship, racism, and war.

He was also unhappy.

“I was traumatized into writing by war events,” Rod Serling explained. “By going through a war in a combat situation and feeling the desperate sense of terrible need for some sort of therapy. To get it out of my gut, write it down. This is the way it began for me.”

And he thought his life story would be boring???

It was a turning point for me.

I decided if this insecure man can become a scrip writing legend, than there was a chance for me to make it as an author, too.

And now, before I get to the point of this entire article, let’s pause for a commercial break….

Preorder today! I dedicated my sixth singer-songwriter album to the great Melissa Etheridge

Be the first! Preorder my new album “The Great Something” as a limited edition collectible audio CD. All original transformational songs. All dedicated to Melissa Etheridge. You’ll get a surprise bonus gift when it ships in March. See http://www.thegreatsomethingalbum.com/

And now let’s continue with this article….

Back to the episode I saw the other night.

It took place in an office.

A businessman is talking to his secretary.

He is preparing to go on a trip.

He goes to his phone, starts to dial his wife’s number, when suddenly someone shouts, “CUT!”

He watches as his office walls are moved.

And then he sees an entire film crew looking at him.

He is on a movie set.

The yelling of “CUT!” caused him to freeze.

He is almost traumatized by this turn of events.

Imagine how you would feel if right now you heard a booming voice yell “CUT!” and then you saw the walls around you move apart, only to reveal a film crew that has been watching you the whole time.

The episode is from 1960. It’s #23. It was written by Richard Matheson. It’s called “A World of Difference.” Howard Duff is the key actor. Find it and watch it sometime.

And now let’s get to the point:

Here’s how I discovered a self-help “instant change” technique:

Whenever you notice anything not going the way you want it to, mentally or out loud yell, “CUT!”

And then do, think or say something different.

Use “CUT!” as a command to change your mind or even a situation.

A friend was complaining about her day.

I listened for a moment.

She stared at me.

“Let’s redo this scene,” I said. “Say your lines differently this time.”

I had to explain the entire Twilight Zone episode to her before she understood what I was doing, but my “pattern interrupt” caused her to smile and begin a new conversation.

I was served dinner at a restaurant.

I was about to complain about the dish when I remembered that complaining doesn’t help. It’s far wiser to state an intention instead.

“State what you want,” I told myself, “not what you don’t want.”

I then stated that I wanted my food heated up a little more, and the server smiled and handled it. No one was offended by a complaint, and I got what I wanted from the intention.

I’m simply pretending that life is a stage play or television show.

As long as “the show” entertains me, fine.

But if I or someone in my real life reality show gets “out of tune” or goes “off script,” I can simply say “CUT!” and “Let’s do the scene again!”

“In almost everything I’ve written, there is a thread of this: man’s seemingly palpable need to dislike someone other than himself.”- Rod Serling


My own philosophy of life states that life is an illusion, anyway.

We’re all actors and actresses on the stage of life.

The problem is, we are all in a hypnotic trance and believe our roles.

“Awakening” is all about realizing you are acting out a script, though unconsciously.

By saying “CUT!” and pausing, you start to awaken from the trance and redirect your life.

In a real sense, you become the scriptwriter of your own life.

I’m having fun using this self-help method in my daily life.

If I notice my thoughts start to go downhill, I just yell in my mind, “CUT!”

And then I choose to “redo my lines” by thinking more upbeat thoughts.

I doubt anyone involved with the making of The Twilight Zone ever thought of this way of retraining your brain and interrupting patterns, but I like thinking Rod Serling is smiling from above.

PS — One of my favorite screenplays by Rod Serling was titled, Patterns. It was a live television drama in 1955. It became a movie in 1956. Yelling “CUT!” is a great way to break a pattern. Just sayin’.